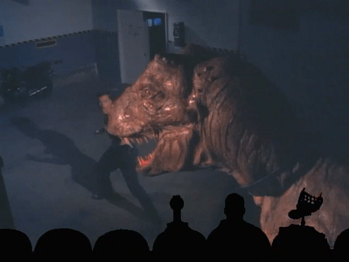 "It's not the future, and there isn't a war, but you know me, I don't like to complain."
— Crow T. Robot
"There's a moment in this movie which is kind of heartbreaking. There's a brief scene where a television news reporter is doing a live remote stand- up. His cameraman is using a pretend card-board camera; its a taped-up box with a lens apparatus taped to it. That made us sad."
— Mary Jo Pehl, The Amazing Colossal Episode Guide

Interesting note of trivia: while Future War was produced and completed in 1994, it never saw a video release til 1999, the same year as the MST3K episode airing, technically making it the most recent experiment of the show's original run from a release date standpoint, beating out even Werewolf. The all-time record was broken by 2013's Atlantic Rim in the revival series.

The Mystery Science Theater 3000 treatment of this movie contains examples of:

[The Runaway headbutts the Head Cyborg and takes his shirt off.]