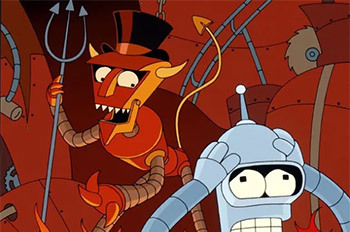 Condemned by the Space Pope

After a Beastie Boys concert, an old friend of Bender's introduces him to "jacking on" with electricity. Bender quickly becomes addicted, but his secret is exposed after he is welded to the Planet Express ship during a delivery through a lightning storm in space. Looking for a better way, Bender finds religion, which turns his life around but he gets to the point where his friends find the new change too extreme, prompting Fry and Leela to lead him back to his sinful ways. It doesn't take long, but Bender soon discovers that his new religion has an Easy Road to Hell after he is kidnapped by the Robot Devil.