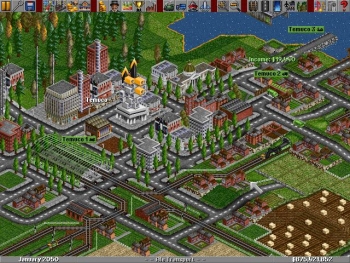 (of RollerCoaster Tycoon and MicroProse fame). The apparent object of the games is to end up with a monopoly of transport services for a usually randomly generated map. Transport is provided in all four major modes; air, rail, road and water, though the most profit tends to come from rail and then air.

Transport Tycoon Deluxe is an updated version. It contains numerous bugfixes and gameplay improvements, including new transport modes and UI. The primary difference between the games is how signals operate. The original Transport Tycoon allows only bi-directional signals, which allow trains to pass in either direction. The Deluxe version introduced uni-directional signals, that only allow a train to pass in a single direction.

, is derived from Transport Tycoon Deluxe. Originally a set of patches called TTDPatch, it was created to allow enthusiasts to include other vehicles, especially historical trains and the like, and eventually grew to add all sorts of features. It supported a plug-in architecture, so users could download add-ons they were interested in. Eventually TTDPatch grew much larger than the original game, so some developers decided to replace the remaining bits, allowing the now much-more-elaborate game to be played by anyone. The replacement code was completed in 2004, and an effort begun to replace the art and music, which finished in 2010. OpenTTD is free/open source, and works on a wide variety of operating systems. TTDPatch was maintained in parallel for some time, however OpenTTD eventually surpassed it in nearly every way, and the majority of the huge library of plugins and add-ons only works with OpenTTD.

There is also a Fan Sequel of sorts, called Simutrans, but it's an indie game only Inspired by… and not related or legally connected to the Transport Tycoon series.

Train Fever was an attempt at a modernised Spiritual Sequel by Urban Game], however it had a myriad of limitations and bugs. Most of them were fortunately fixed in Transport Fever, a Surprisingly Improved Sequel launched in 2016 with backwards compatibility for most Train Fever mods (either natively or using a mod that autotranslates the code so it to be usable with Transport Fever).

The original game was superseded officially by its 2004 Spiritual Successor, Locomotion.

) were very informative fansites around the Turn of the Millennium, but are almost useless now. The most valuable information can still be found at TT-Forums

, with only the TTDRussia Forums

showing any other activity to this day.

OpenTTD is still being regularly updated, and was released on Steam