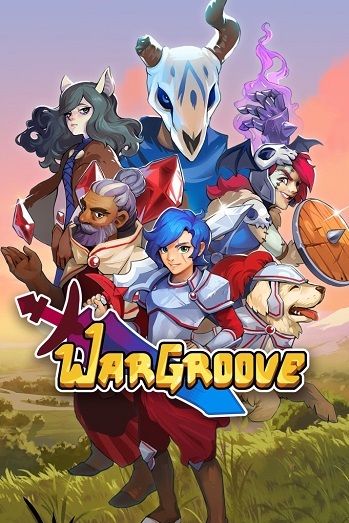 Our groovy heroes (and villains, too).
Advertisement:

...Okay, it's Advance Wars, IN MEDIEVAL TIMES. Well, that was easy, who's for lunch?

All joking aside, Wargroove

is a 2019 Turn-Based Strategy game for PC, Nintendo Switch, Xbox One, and Playstation 4 by Chucklefish, developers of Starbound and publisher of Stardew Valley. Like its predecessors, it is an intentionally retro-looking game intended to serve as a Spiritual Successor to a previous franchise, in this case Nintendo's venerable Advance Wars series with a seasoning of Fire Emblem added.

The gameplay will be immediately familiar to any Advance Wars fan: Starting out with a headquarters and a few units, players take turns to slowly conquer the map by claiming settlements and defeating your opponent's units in turn-based moves heavily dominated by Tactical Rock–Paper–Scissors, buying new units from buildings you claim along the way. You win by either destroying the opposing headquarters or by defeating their hero. In addition to the Advance Wars staples the game also adds its own touches with the introduction of commander units, powerful unique units that represent your army's general and will fail you the game if they are defeated, and a built-in turn limit for multiplayer games where the player with the most territory and units will win when time runs out. Commanders each have unique hero powers called 'grooves' (similarly to CO powers) that slowly charge up as the commander fights battles. The game supports 4-player multiplayer games over the internet with cross-platform compatibility, as well as the ability for players to play multiple games at a time and message their opponent when their turn is done instead of waiting around for the opposition's moves in-game.

The game's included single-player campaign follows Mercia, recently-crowned queen of the Cherrystone Kingdom after her father is murdered by the Felheim Legion in an attempt to weaken Cherrystone for an invasion. Over the course of the campaign Mercia must make common cause with her other neighbours, the Heavensong Empire and the Floran Tribes, and repeal the Felheim Legion's invasion. The game also comes complete with a map and campaign editor that promises the ability for anyone to make (and share) their own stories online with anyone who would like to play them.

In October 2019, a free Expansion Pack named Wargroove: Double Trouble was announced. It introduces a new co-op story campaign, three new commanders (Wulfar, Errol and Orla, and Vesper), two new units (the Rifleman and Thief), and a range of balance updates and improvements to both the map editor and online play.