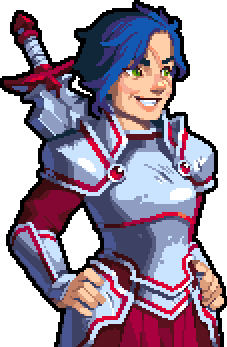 The main heroine, and newly crowned Queen after her father's assassination by Felheim forces.

Mercia's Groove is Healing Aura, which heals all friendly units within three squares (including herself) for 50% HP. 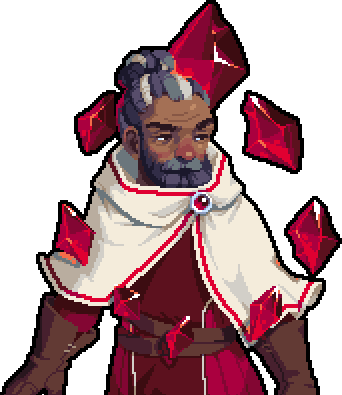 The royal advisor, a powerful mage, and Mercia's tutor in the ways of battle.

Emeric's Groove is Elder Shield, which creates a Power Crystal on a square next to him. The crystal increases the defense value of all terrain within three squares by 2 for all friendly units (maximum 4 defense), and will slowly degrade over time (though it can be attacked and destroyed by enemies to end the effect early). 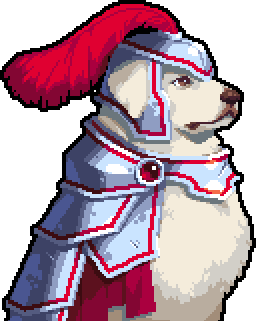 The royal guard dog, whose presence on the battlefield motivates troops. Is a Very Good Boy.

Caesar's Groove is Inspire, which allows all adjacent units to act again this turn. 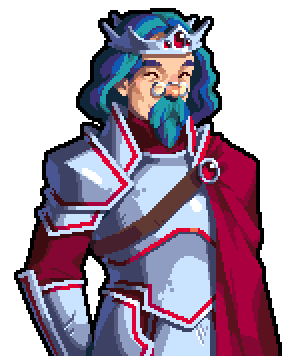 The former King of Cherrystone, who is assassinated in the introductory mission while trying to decide how to tell his daughter about an ancient kingdom.

Mercival's Groove is Gone Fishing, which allows him to catch a fish if adjacent to a water tile. 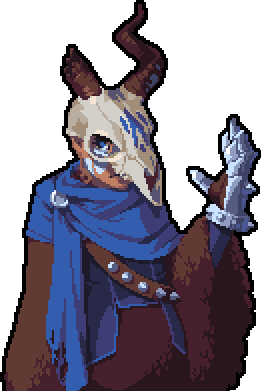 A mortal necromancer that wields the Fell Gauntlet, and the leader of Felheim's forces.

Valder's Groove is Raise Dead, which creates a Dreadsword (soldier) in an empty square adjacent to him at no cost. The Dreadsword can act immediately. 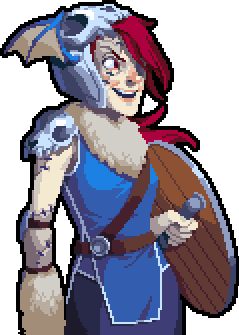 A zombie created from pieces of history's finest warriors, put together by Valder to be the ultimate commander.

Ragna's Groove is Shield Jump, allowing her to teleport 5 tiles and deal 65% of her regular damage to adjacent units when she lands. 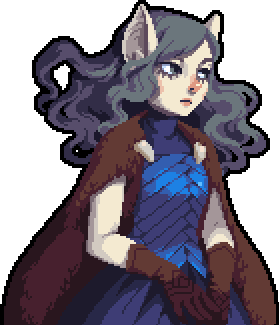 A High Vampire, and Valder's most trusted subordinate.

Sigrid's Groove is Vampiric Touch, which One Hit Kills an adjacent enemy unit and heals Sigrid for each HP drained. 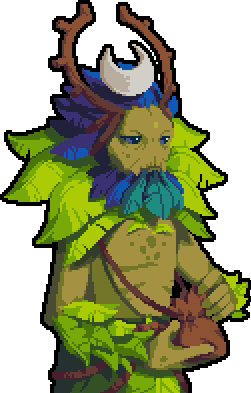 The Floran elder, who rules with both strength and compassion.

Zawan's Groove is Wild Growth, which creates five vines on five empty squares within five squares (selected by the player). The vines block enemy movement but cannot attack or counter-attack, and slowly degrade over time. 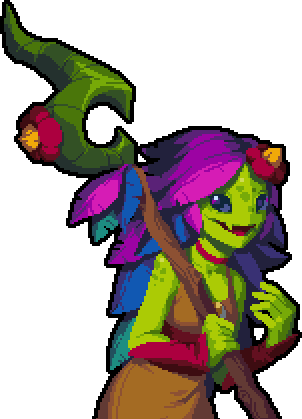 A young Floran hunter whose skills are out of this world.

Nuru's Groove is Teleport Beam, which allows her to purchase a unit for double its usual cost and deploy it in a square next to her. The unit can then move immediately. 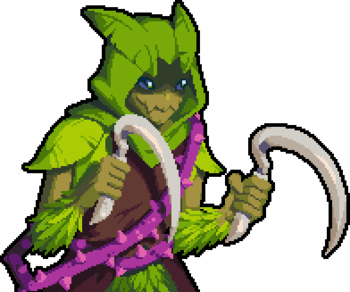 A sinister Floran that considers all other races his prey, and thrives on the fear of others.

Sedge's Groove is Sadistic Rush, which deals a flat 35% damage to an adjacent target with no counter-attack. If Sadistic Rush kills its target, Sadistic Rush is immediately recharged and Sedge gets to take a new turn's worth of actions. 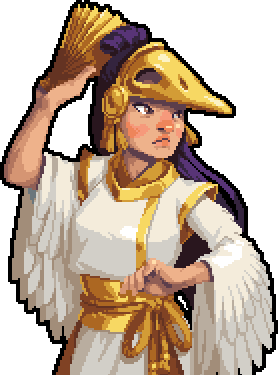 The noble and pragmatic Empress of Heavensong, Tenri possesses the power to manipulate the winds.

Tenri's Groove is Rising Wind, which allows her to move any unit within five squares of herself, friendly or enemy, to any unoccupied square within the same area. Can also move herself, but not the enemy commander. 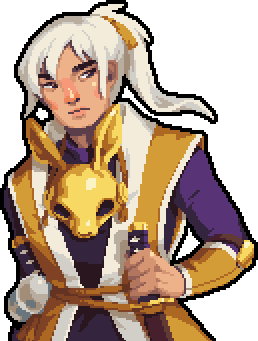 An unwaveringly loyal supporter of the Empress and his nation.

Ryota's Groove is Blade Dash. When used, Ryota performs a number of linear dashes through lines of enemies, dealing 45% of his regular damage to any enemy units caught underneath. It can also pass through allied and neutral units, which will not deal any damage to them. It can make as many dashes as possible, but cannot dash through the same unit twice. 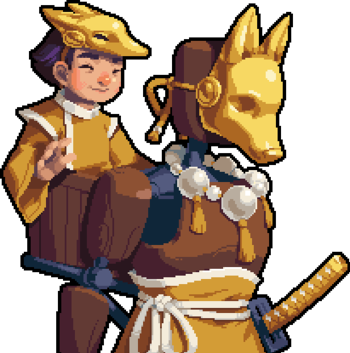 The son of Empress Tenri, Koji is an enthusiastic and committed young commander. Although he is only just developing his skills, he is nonetheless an impressive kid - especially when it comes to the weapons he creates. Koji's most remarkable creation to date is Tenko, the 12-foot tall fox puppet he pilots.

Koji's Groove is Sparrow Bombs. When used, two unique Sparrow Bomb units are spawned nearby, which may then immediately fly up 5 spaces and detonate, inflicting 50% of Koji's full damage on nearby enemy units. 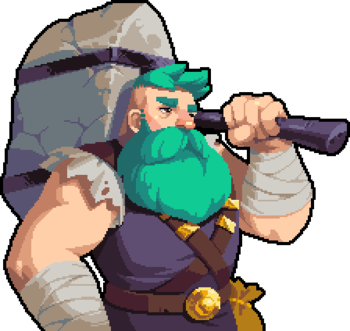 Descending from a long line of pirates and thieves, Wulfar is Chief of the largest and oldest Outlaw clan in Aurania. Renowned for his adaptability and problem solving, in spite of his appearance.

Wulfar's Groove is Tee Off. When used, Wulfar can launch units across the map, potentially moving allies into advantageous positions, or throwing enemies into the ocean. When used against enemies, it deals damage to both the target unit and any enemy unit adjacent to them when it lands. 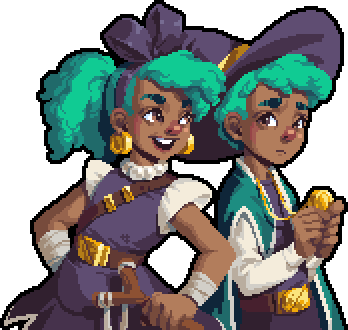 The thoughtful Errol and feisty Orla are a pair of troublemaking twins, who work effectively as a pair despite their bickering.

Uniquely, Errol and Orla have two separate Grooves that they can choose between depending on the situation. Errol's Groove is Cooling Water. When used, Errol covers an area of the map with healing magic that shrinks in size each subsequent turn. Both allied and enemy units inside this radius are healed for 20% of their health per turn. Orla's Groove is Scorching Fire. When used, Orla ignites a single tile, which grows on subsequent turns. Both allied and enemy units on a flaming tile are instantly defeated. 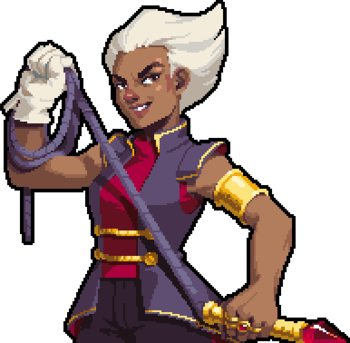 Sly, deceitful and abrasive, Vesper certainly makes an impression – this notorious criminal is capable of conjuring a demonic smoke beast with just a whip and a flourish!

Vesper's Groove is Smoke Shroud, which spawns an obscuring cloud of smoke on her location for one round. Units positioned in the smoke cannot be attacked or counter-attacked.

The Bandits
A trio of outlaw rangers that prey on the defenseless and have a surprisingly good grasp of feudal-era socioeconomics. They serve as antagonists of Caesar's side missions during the Campaign. They have no actual commander unit associated with them. 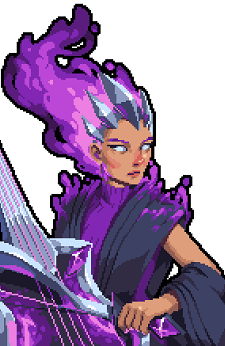 The keeper of Requiem. Formerly the Princess of the ancient kingdom of Cacophony, she sacrificed herself to seal the weapon, and now exists as a wraith guarding over it. Serves as the Final Boss of Arcade Mode as well as in Campaign Mode.

Her Groove is Nocturne of Woe, which instantly flips the allegiance of a single unit to Elodie's control. 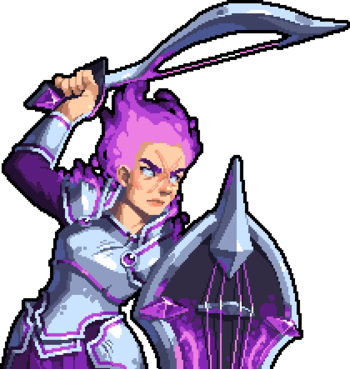 An Evil Counterpart to Mercia created by Requiem, representing her embracing Requiem's power. The True Final Boss of Campaign Mode, and unlockable for use in Arcade Mode and online play afterwards.

Dark Mercia's Groove is Aura of Ruin, which drains all enemy units within 3 squares of 3 health and gives it to Dark Mercia.