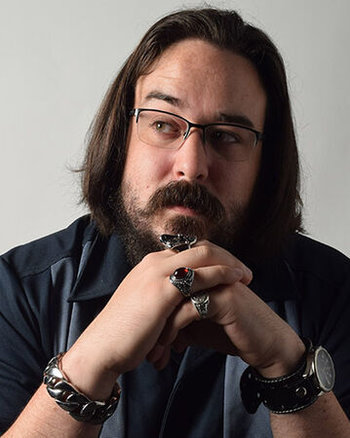 Jason Marnocha (born March 9, 1989 in Indiana, United States) is an American voice actor, who is best known by his Online handle as "LordJazor". In official properties he can be heard as Keicho Nijimura in JoJo's Bizarre Adventure: Diamond is Unbreakable, Gansaku Nanbu in Megalo Box, Headmaster Hellvis in Hell's Angels, Steven Martland in Hero Mask and Amadeus Guildenstern in Never Stop Sneakin. Online, he can be heard in Bat in the Sun's productions and his Fandubs as The Joker, Deathstroke in Rooster Teeth's DEATH BATTLE!, a number of characters in the DC Abridged Universe web-series and Dr. Wheelo in Team Four Star's Dragon Ball Z Abridged: The World's Strongest.