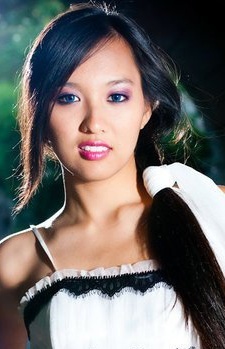 Faye Mata (born September 2, 1992) is a professional voice actress and a former competitive gamer. She primarily voices video game and animated characters, best known for Lulu from League of Legends. Faye played games semi-professionally in tournaments around the world under the gamertag “Princess Aura,” including Syfy’s national reality TV show gaming competition, WCG Ultimate Gamer. Even as a voice actor convention guest, Faye is notorious for crashing the game room and competing in tournaments and playing with fans.

She often works with Bang Zoom! Entertainment. She gained attention from anime fans with her role as Rin Hoshizora in Love Live!. Known for her cutesy voice and undying love for the color ice blue, most of her roles are Wide-Eyed Idealists, usually either Genki Girls or Cloudcuckoolanders. She's also a dedicated video game, anime, and manga geek as well.

. She also occasionally streams Smash Ultimate on her Twitch channel

, and has her own Discord server

THESE TROPES SNORTED AT ME! ME! THE VOICE ACTRESS THEY'RE ASSOCIATED WITH!!

And make no mistake, you are going to love me and admit that this page tastes purple! Or else YOU WILL BE SLAPPED DOWN!
... (snort)