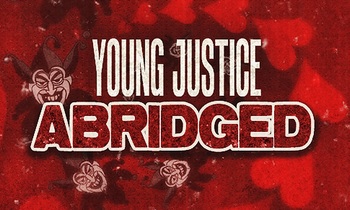 Young Justice Abridged is a Gag Dub of Young Justice (2010) created by a group called The Fedora Players. A rather ambitious project, the series does not only focus on parodying its original counterpart, but also seeks to extend its story to the DC Universe Animated Original Movies as well, i.e. the abridged version of the events of Batman: Under the Red Hood takes place roughly after the series tackles the story arc involving Amazo. As such, Young Justice Abridged ends up being the center of what its creators call the DC Abridged Universe.

Official site (with all the full episodes and other movies in this universe: http://www.dcabridgeduniverse.com/

after a decade long run. However, before the decision to Wrap It Up, there were going to be two more movies (Judas Contract & Batman: Hush) and probably one more episode but it was decided to skip to the ending. Silver lining, the scripts for the two movies are available on their Patreon for those who supported them with money to read.

Things would ultimately change on September 5th, 2020, as the series finale would be officially declared cancelled

. The final draft of the script for said episode was posted on their Patreon, but outside of that, the series was officially Cut Short.

Tropes used in this abridged series include: