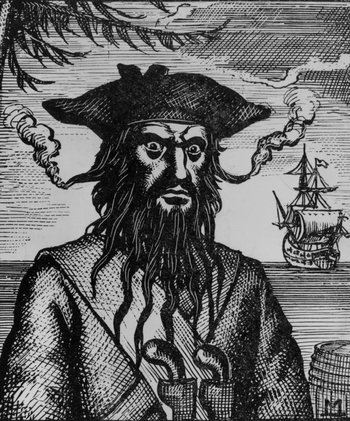 "If I don't kill one of you every now and then, you'll forget who I am." note Said after shooting his first mate under the table, for seemingly no reason. However, the first mate, Israel Hands, lived. The shooting probably saved his life as it prevented him from taking part in Blackbeard's final battle.
"Why fly a black flag, when a black beard will do?"
— Assassin's Creed IV: Black Flag
Advertisement:

Born in the town of Bristol, (maybe), Edward Teach (or Edward Thatch) (circa 1680 – November 22, 1718), better known as Blackbeard, was the most famous pirate of The Golden Age. He was not the richest, nor was his career the longest, and he probably wasn't even the meanest, but he set the standard for Golden Age piracy, codifying the image in popular culture. When we think of pirates, he is the first one to come to mind. Maybe because of his flair for drama, and his weaponization of the terrifying pirate image.

Blackbeard's origins are sketchy; history records very few facts about his life before his pirate career began. English by nationality, he was most likely born in the port city of Bristol, sometime around 1680. His birth name is commonly given as "Edward Teach," but not even that is a certainty. Given that most accounts place him as being fully literate, there is a good chance that he came from at least some money. The earliest reliable historical mention of an "Edward Teach" was that of a privateer in the British Navy during the War of the Spanish Succession, circa 1714. He was apparently a good, if not particularly remarkable, sailor and seaman. After the end of the War, Teach, along with many privateers who now found themselves unemployed, migrated to the Caribbean and took on a full-time career in piracy. So many pirates did this, as a matter of fact, that they actually took over the Bahamian island of New Providence and declared it a "Pirate Republic." It was here that Teach hooked up with legendary privateer Benjamin Hornigold, and wound up commanding a ship under him.

Between 1716 and 1717, Teach and Hornigold raided the Caribbean islands and the Carolina coast, growing in strength and reputation. Eventually they allied with a third pirate, Stede Bonnet, and between the three of them they became a serious threat to the southern British colonies. Toward the end of 1717, Hornigold was forced into retirement and Bonnet voluntarily stepped down from his command, leaving Teach the sole commander of the small fleet. Under Teach's command his crews became bolder, capturing more ships and cargo and increasing their size and strength. One such captured prize, a French frigate called La Concorde, was re-christened Queen Anne's Revenge and claimed as Teach's flagship. And around this time, Teach officially started being referred to as "Blackbeard."

Over the course of 1717 and 1718, Blackbeard continued to raid and pillage, mostly around Florida and Hispaniola, taking more prizes and increasing the size of his fleet. By May of 1718, his fleet had grown so powerful that he successfully blockaded the port of Charleston, ransoming a shipload of high-society Charlestonites for... medical supplies.

Shortly after the Blockade of Charleston, word came down that the British government was about to crack down hard on Caribbean piracy. The pirate-hunter Woodes Rogers was on his way with a fleet of warships, preparing to wipe New Providence clean... but any pirate who surrendered to the authorities before he got there would be offered a provisional pardon. Blackbeard and Bonnet were considering taking the pardon and going straight, but they were wary; the exact conditions of this blanket pardon were subject to the interpretation of the individual colonial governors, so they had to be very careful which local authority they decided to surrender to. They opted for North Carolina, since Governor Charles Eden was actively recruiting privateers, and they made a plan to test his honesty and leniency: they careened their ships on the coast, and Bonnet would head to Bath Town to seek the pardon, while Blackbeard would wait for him. Eden did in fact offer Bonnet a pardon and a privateer's commission, but once Bonnet returned he found that Blackbeard had double-crossed him: Blackbeard had scuttled the ships, marooned the crews, and taken off in a smaller ship with all the valuables he could carry. So pissed was Bonnet that he returned to his pirating ways to hunt down Blackbeard. He failed, and was captured and executed for his troubles. Meanwhile, Blackbeard also got a pardon and a commission as a privateer, operating out of North Carolina's Outer Banks.

Of course, the line between "pirate" and "privateer" is pretty damned fine, and the Governors of other colonies were soon screaming for Blackbeard's head, claiming acts of piracy on vessels out of their ports. It's not unlikely either; privateers were supposed to only sack enemy ships, but some Governors would even allow the sacking of friendly merchant ships as long as they got a cut. In November of 1718, Governor Alexander Spotswood of Virginia sent Lieutenant Robert Maynard, commander of the Ranger, after him. Maynard tracked Blackbeard to Okracoke Island and engaged him in a ferocious battle. Fighting like a cornered beast, Blackbeard soaked up an insane amount of damage, and was finally brought down, taking ten members of Maynard's crew with him.

Blackbeard has gone down in popular culture as the quintessential pirate. He has a reputation for cruelty as well as cunning. Indeed, his greatest talent might well have been the weaponizing of that reputation for cruelty, crafting an image for himself that was so fearsome that crews would just surrender without a fight if they saw him coming for them. Exactly how much of this reputation was real, how much was him playing it up, and how much was fabricated by the authorities to demonize him, may never be known. Indeed, there is no evidence of him committing a single murder until his Last Stand. His reputation as a Bad Boss who frightened his crew with eccentric actions and Refuge in Audacity ploys probably proved to be his undoing. He had a reputation for randomly killing or maiming whoever his first mate was at the time, and however exaggerated that might be, it wasn't beyond him to do so if it helped his image. One of his own crew-mates played a part in his final defeat.

Among the pirates of the Golden Age, all colorful characters in their own rights, Blackbeard stands out on his own level. And he probably would have liked it that way.

Tropes Associated with Blackbeard's portrayal in tales, and fiction include:

Works Featuring Portrayals of Blackbeard Include: