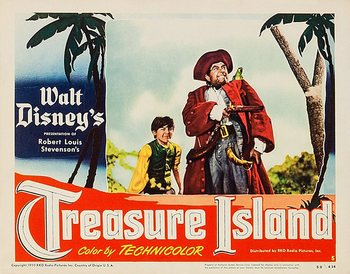 The 1950 film Treasure Island was the first color adaptation of the novel. It was directed by Byron Haskin and starred Bobby Driscoll as Jim Hawkins and Robert Newton as Long John Silver, in a performance that did much to shape popular notions of what it means to Talk Like a Pirate.

The film was produced by Walt Disney Productions, and is the first Disney movie to be entirely live-action. (At one point there was a plan for a short animated sequence illustrating a story being told to Jim, à la Song of the South, but this idea was ultimately abandoned.)

Robert Newton reprised the role in Long John Silver (1954), alongside Byron Haskin and an otherwise all-new cast. Haskin and Newton followed this up with The Adventures of Long John Silver the following year, which ran 25 episodes (in colour) until Newton's death. Neither of these were Disney productions.