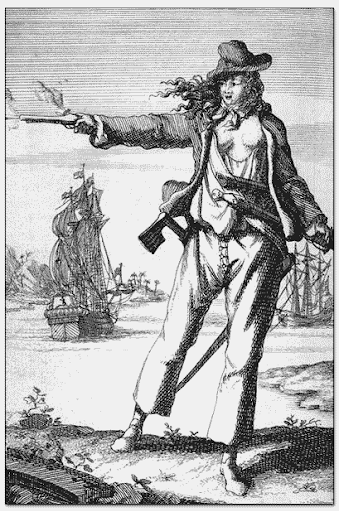 Bonny from a Dutch version of Charles Johnson's book of pirates
Advertisement:

Anne Bonny (sometimes spelled 'Bonney') was an 18th century Irish pirate and arguably the most famous real life version of a Pirate Girl.

Born in Kinsale, Ireland, Anne had a rocky start in life. She was the illegitimate daughter of lawyer William Cormac and his maid. For the first several years of her life, her father tried to pass her off as a boy, the son of a relative to prevent scandal. When her true identity was revealed the family was so ruined by the fallout that they ended up leaving Ireland for a new life in America.

In America, Anne ended up marrying a poor sailor and part-time pirate named James Bonny - and was disowned by her father for her choice (legend has it she set fire to her father's plantation in retaliation.) The two moved to New Providence in the Bahamas, where James turned informant for the governor and Anne turned to pirate captain John "Calico Jack" Rackham. When James found about the affair, he took her to the governor, demanding she be flogged for adultery. Rackham offered to buy her divorce from her husband, but it was Anne who refused - incensed at the idea of "bought and sold like cattle." She and Rackham managed to escape and, with the help of another female pirate, Mary Reade, she stole Rackham's ship from Nassau harbour and took to the seas, recruiting a crew.

Interestingly, given the way she was raised, Anne Bonny didn't disguise herself as a man during her career as a pirate - her gender was public knowledge.

Eventually, Rackham's ship was attacked by an English sloop and most of the crew (Rackham included) put up only token resistance. Anne, on the other hand, resisted fiercely, aided only by Mary Reade and one other pirate. She doesn't appear to have been happy at Rackham's lack of fighting spirit as when the two confronted each other in jail in Jamaica while awaiting execution, she told him she was "sorry to see him there, but if he had fought like a Man, he need not have been hang'd like a Dog."

Anne Bonny herself escaped execution thanks to being pregnant with Rackham's child, and then (probably) being ransomed by her father. History does not record what happened afterwards. Historians are divided on what happened next but her career as a pirate at least was over.

Tropes related to Anne Bonny include:

Works that portray Anne Bonny in fiction include: