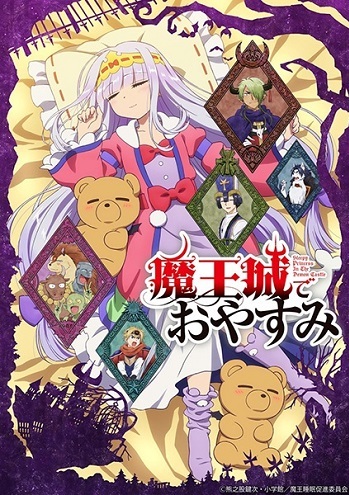 The stuff of nightmares herself.
Advertisement:

Tragedy has struck the Kingdom of Goodereste, for their beloved princess, Aurora Syalis Goodereste, has been captured by the Demon King Twilight, who has declared that he will only return her if the humans surrender the world to him. A coalition of heroes is then assembled to rescue the princess, led by her childhood friend Sir Dawner; unfortunately, because their leader is such a scatterbrain, rescuing her might be tougher than it is supposed to be.

Meanwhile, things aren't exactly smooth sailing for the Demon King and his cohorts either, because as it turns out, their hostage is quite the troublemaker. Worse still, whenever she's not causing all sorts of problems, she'll often sleep the day away... and when she's aroused against her will, somehow being attacked by the hero's party will become the least of their problems.

Sleepy Princess in the Demon Castle (魔王城でおやすみ, Maōjō de Oyasumi, literally Sweet Dreams in the Demon King's Castle), is a genre mix of Slice of Life, comedy and high fantasy written and illustrated by Kumanomata Kagiji since 2016 for Shogakukan's Weekly Shōnen Sunday series and licensed for English release by VIZ Media. It also has an anime adaptation directed by Mitsue Yamazaki for Doga Kobo, premiering in October 2020.

Has nothing to do with Sleeping Princess in Devil's Castle, the second Non-Serial Movie in the Dragon Ball franchise.

The princess wants someone to touch pressure points on her back so she can sleep better, not realizing how perverted her request sounds.

The princess wants someone to touch pressure points on her back so she can sleep better, not realizing how perverted her request sounds.