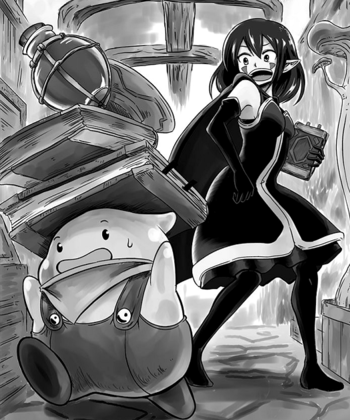 Slime Life is a fantasy slice-of-life manga by Megasawara, first published in 2017 in Shounen Jump +. The manga begins with magic shop proprietor Darul perusing the catalogue of the "Monster Dispatch Company" in search of a new assistant. Disenchanted with the high price of golems and gargoyles, Darul muses that she'll have to settle for something cheaper, like a goblin or an imp.

What they send her is a slime named Slime. Thus begins the adventures of Slime trying his best to be useful, and Darul trying her best to find any excuse to hug his soft, squishy form.