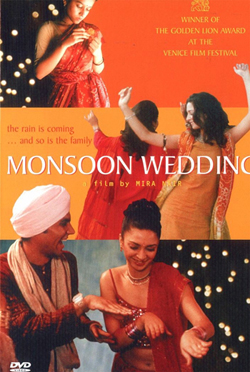 Monsoon Wedding is a 2001 film directed by acclaimed Indian-American filmmaker Mira Nair, shot with cooperation from both Bollywood and Hollywood. A critical and financial success, it won the Golden Lion at the Venice Film Festival and has since been reissued as part of The Criterion Collection.

On the surface, it's a chronicle of the Arranged Marriage of Aditi Verma and her fiancé Hemant Rai in New Delhi, with Aditi's harried father Lalit trying to put together a lavish wedding. But it also features a number of subplots about love, romance, and family. Secrets and lies are exposed for good or for ill. At its heart though, this film is about family.