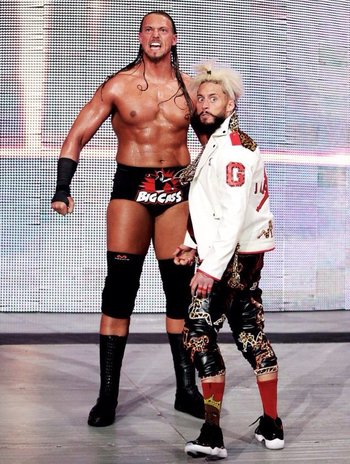 Enzo and Cass are a professional wrestling tag team consisting of Enzo Amore (born Eric Arndt on December 8, 1986 in Hackensack, New Jersey) and Colin "Big Cass" Cassady (born William Morrissey on August 16, 1987 in New York City), both working for WWE, formerly under its developmental brand NXT before being called up to the main roster.

Colin Cassady made his first televised FCW appearance in July 2011, portraying the dean of the University of Florida. He wrestled his first televised match on the September 4, 2011 episode of FCW TV for a disqualification loss against Richie Steamboat. Cassady found no immediate success and continued to lose matches for the rest of 2011 and in early 2012. Cassady finally scored his first win on the March 11, 2012 episode of FCW TV by defeating Kenneth Cameron. Cassady's final FCW TV match was broadcast on July 7, 2012 and saw him defeat Aiden English.

Enzo Amore made his debut on May 22, 2013, where he was quickly defeated by Mason Ryan. Amore went on to form an alliance with Colin Cassady, who had previously also lost in his debut to Mason Ryan, and they labelled themselves "the realest guys in the room". After the feud with Ryan, Amore and Cassady went on to feud with Rusev, Sylvester Lefort and Scott Dawson. On September 25 episode of NXT, Amore and Cassady participated in a gauntlet match for a future shot at the NXT Tag Team Championship; they started the match, first defeating C.J. Parker and Tyler Breeze, then beating Rusev and Dawson, but fell to their final opponents, the Ascension.

Amore and Cassady formed an alliance with the debuting Carmella. The duo had accidentally cost Carmella her hairdressing job as per the storyline, causing her to demand to get a job as a professional wrestler.

On the April 4, 2016 episode of Raw, Amore and Cassady debuted on the main roster (without Carmella) and confronted The Dudley Boys. A week later on SmackDown, Amore and Cassady defeated the Ascension in their main roster debut, in a tournament to determine the number one contenders for the WWE Tag Team Championship. The team went on to defeat the Dudley Boyz on the following week's Raw in the semi-final of the tag team tournament, advancing them to the finals. In the finals, Enzo and Cass faced the Vaudevillains at Payback, with the match ending in a no contest after Amore suffered a legitimate concussion during the match. At the Money in the Bank pay-per-view, Enzo and Cass faced The New Day, The Vaudevillains and Karl Anderson and Luke Gallows, in a fatal-4 way tag team match for the WWE Tag Team Championship, but The New Day retained their titles. On the July 4 edition of Raw, Enzo and Cass helped John Cena from an attack by The Club, involving themselves in the feud between Cena and The Club. As a result, Enzo and Cass teamed with Cena to face The Club in a six-man tag team match at Battleground, which they won. On the July 19 episode of SmackDown, as part of the 2016 WWE Draft, Enzo and Cass were drafted to Raw.

On the June 19, 2017 episode of Raw, Enzo and Cass officially broke up after the revelation that Big Cass was Enzo's mystery attacker.

By June 2018, both Enzo and Cass have been released by WWE. Enzo was released due to mounting backstage heat and accusations of rape (which were eventually dropped due to lack of evidence). Cass was released also due to backstage heat; while it was widely claimed to be solely for beating up a midget after being told not to (although it served to be the beginning of the end of his time in the company), in reality it was due to conflict with producers, being publicly intoxicated during a European tour, getting in a heated political argument backstage with Sami Zaynnote Cass is a very vocal supporter of Donald Trump, while Zayn is a staunch liberal activist. While Vince McMahon isn't likely to punish someone just for agreeing with political beliefs different to that of a coworker, not to mention how Trump one of his closest friends and shares a similar "strong sense of Americana" in his personality, the fact that Cass conducted a public, verbal confrontation with Zayn in the presence of both locker room members and backstage personnel nonetheless did him no favors backstage, and another behind-the-scenes incident involving his ex-girlfriend Carmella where he had to be physically separated from her, proving to be the straw that broke the camel's back.

Enzo is currently a rapper by the name of real1 though has made several appearances on the independent scene, Enzo also making an impromptu appearance

in the front row of 2018's Survivor Series event, where he did his signature "My name is Enzo Amore" bit before being dragged out by security and banned from the Staples Center for the foreseeable future. Big Cass also works in the indies under the name Big Cazz, although he did later change it to Big C. Cass' indie career is currently on hiatus following a stroke he suffered in December of 2018 at a House of Hardcore event. The duo would surprisingly reunite at Ring Of Honor's G1 Supercard on April 6 2019 as nZo and CaZXL collectively, calling themselves FreeAgentZ. Cass is currently employed by Impact Wrestling under the name "W. Morrissey", while nZo is expected to debut with MLW.

Bada-boom, realest tropes in the room! HOW YA DOIN'!?

Enzo tries hitting on Maryse. The Miz rebukes him and lists down the reasons why nobody likes him and why he's a failure.

Enzo tries hitting on Maryse. The Miz rebukes him and lists down the reasons why nobody likes him and why he's a failure.