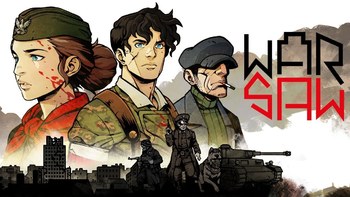 !
"We were young."
"Full of life."
"Looking forward to tomorrow."
"The thing is-"
"We had to fight for our tomorrow!"
Advertisement:

Warsaw is a World War II Dungeon Crawling RPG with Turn-Based Combat, about the heroic and doomed uprising

of the Polish Home Army and Resistance movements throughout Warsaw in 1944, developed by studio Pixelated Milk, and released for PC through Steam, on October 2nd, 2019note The 75th anniversary of the last day of the Uprising..

August 1, 1944. W-Hour. As the Red Army pushes west and the British, Free French, Canadians and Americans advance east across France, the defeat of Nazi Germany looks certain. Poland has been occupied by the Nazis since 1939 and the Polish Home Army now sees an opportunity to liberate the Polish capital of Warsaw as the Russians approach- preparing to substitute one brutal occupying force for another. There is only one chance to create a free Polish state, and the Resistance networks have worked tirelessly these past years stockpiling supplies and building intelligence networks, waiting for this moment.

At dawn, thousands of Poles take to the streets wielding pistols, rifles, black-market submachine guns, and even home-made armored vehicles to drive out the Nazis. Men, women, and even children.

Gameplay is divided between party management at HQ and crawling through the city of Warsaw to fight the Nazis. At HQ of you manage the health and status ailments of your party and decide which districts of the city to defend and which to slowly abandon to the Nazis. Out in the field, your party navigates the maze of Warsaw a la Pac-Man, hunting for supplies and trying to kill enough Nazis in Darkest Dungeon-style combat to repel the attack on the neighborhood. It's a slow grind, and few if any of your party may survive beyond the uprising's conclusion.