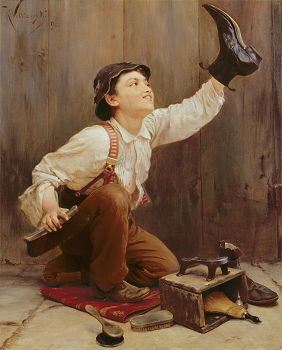 Get the cool shoeshine.
"Now go home and get your fuckin' shinebox!"
— Billy Batts, Goodfellas
Advertisement:

The Shoe Shine Boy is a young boy who carries around a box. Inside the box are the shine tools, which the boy takes from the box as the customer places his shoe on a pedestal built on the box.

The Shoe Shine Stand is a bunch of chairs, where the customer sits and places his feet up on a stand in front of them. Since this is a more established business, the shoeshiners are generally adult men. They are often black men, so calling them shoeshine "boys" is not recommended in modern times.

Stands are often seen at bus and train stations, as well as at hotels. In older stories they were often on the street.

Shoe shining is often used as the first step in a character's working his way out of poverty — the Burger Fool of its day. Horatio Alger Jr. is probably the Trope Codifier, if not the Trope Maker, for that aspect (see Literature below).

Shoe shine stands do still exist, but this site is about tropes. You don't see them much in media set in the present anymore, although they may still appear in historical fiction.