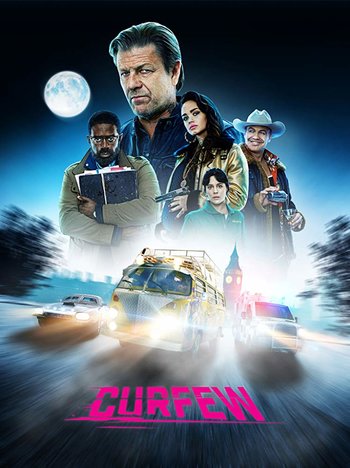 What could possibly go wrong?
Take a look around you right now. There's one thing that everyone who's come out here tonight has in common: defiance. But it's more than that. You didn't just opt out...of the creatures, and the curfew, and the rules and restrictions that come with it. No, you went further than that. You opted in. Now, nothing about the race is easy, but it is going to be worth it. 'Cause at the end of tonight, one team is going to come with me to a place where you can sit out at night and gaze up at the stars. A place without creatures. A place with hope. Good luck, people. Race yourselves free.
—Max Larssen, commencement speech
Advertisement:

Curfew is a Sky One television series. It stars Adam Brody, Billy Zane and Sean Bean. In the U.S., the series is shown officially through Charter Communications Spectrum. In the U.K. it premiered on Sky One on 22 February, 2019.

Five years before the series takes place, a virus breaks out in England. The virus transforms its victims into violently feral creatures called "mooks", but the mooks also develop a sensitivity to light and are unable to go out in the daytime. To protect its citizens, the British government institutes the titular curfew from dusk 'til dawn. By the time the series takes place, the government has become terribly oppressive. Unfortunately, the people are unable to leave.

And that's where Max Larssen comes in. He's organized a race from London to Scotland with the prize being transport to his private island where the curfew and mooks don't exist. The racers must deal with not only the mooks and government agents, but each other as well.

Participants in the race include Kaye Newman (Phoebe Fox), a paramedic whose former boyfriend is the only known person to be infected with the virus and not become a mook; the Donahue family, whose son discovered how the government is keeping people in check; "The General", who's trying to get himself and his pregnant girlfriend out of the country; Team Awesome, who are basically in the race for fun; and Lou and Hanmei, a mother and daughter seeking to escape like everyone else.

Curfew offers examples of a number of tropes, including: