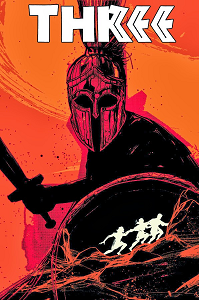 Three is a graphic novel by Kieron Gillen and Ryan Kelly, which began as a deliberate Spiritual Antithesis to the glorification of ancient Sparta in 300 but then became more complex in its approach. It tells the story of three helots (the serf class in Sparta), Klaros, Damar, and Terpander, who are pursued by 300 Spartiates after killing a group of Spartiates who massacred their community.