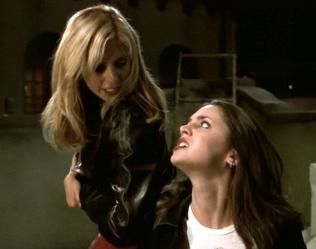 Willow: "I think we could be dead in two days and you're being ironic, detachment guy."
Oz: "Would it help you if I panic?"
Willow: "Yes! It'd be swell. Panic is a thing people can share in times of crisis. And everything's really scary now, you know? And I don't know what's going to happen. A-a-and there's all sorts of things that you're supposed to get to do after high school, and I was really looking forward to doing them, and now we're probably just going to die, and I'd like to feel that maybe you would..." [Oz kisses her.] "What are you doing?"
Advertisement:
Oz: "Panicking."

Graduation robes are being passed out at school. Cordelia kvetches about the color of the gown, while Xander's convinced he's not getting out of this school alive. Willow and Harmony sign each other's yearbooks, and Harmony almost sincerely says she wishes they had gotten to know each other better. Buffy has not caught the spirit, however, and says she's leaning toward skipping graduation in order to fight the Mayor. Xander appears with news: I sure hope Buffy can multi-task, because the Mayor is their commencement speaker. The Ascension will take place at the graduation ceremony.

An apartment full of clutter and artifacts. There's a knock at the door, and a middle-aged dude in a cardigan and bowtie goes to answer. When he opens the door, he finds Faith. She informs him she's been sent by the Mayor, so the Professor asks her in. When "Dr. Worth" lets slip that he's alone, she pulls out a jagged knife and stabs him to death.

In class, Anya tries to entice Xander into going out with her, but is not up-to-date on what men enjoy doing. Sports, right? Yeah, that's the ticket. Xander scolds her for stereotyping, then apologizes; he's on edge because of the Ascension. Anya's eyes widen. The phrase rings a bell.

Buffy shows Giles and Wesley the newspaper headline about the murdered professor; Buffy is sure it was Faith, on assignment by the Mayor. They conclude that Worth knew something. Xander comes in with Anya, who has witnessed an Ascension in the past. Anya explains that the demons walking the earth are not pure; an Ascension turns the subject into a pure demon — which, for one thing, is bigger. Suddenly, the doors of the library swing open and the Mayor enters. The gang recoils with terror. Affably, but with an undercurrent of menace, Wilkins says Faith told him that the library was the gang's "inner sanctum." Buffy sasses him for being in love with the sound of his own voice. A slightly crazy laugh from the Mayor, and then he addresses the clench-jawed Giles.

Giles grabs a rapier and drives it through the Mayor, who responds by scolding him for setting a bad example in front of the children. As he wipes the blade clean, he promises the gang that some of their deaths will be quick, then chuckles, "See you at graduation." Apparently they're in for one heckuva speech.

Buffy is searching the professor's apartment when Angel arrives (Giles sent him as backup). Buffy tells him that the victim was a "volcano-ologist or something," and she found a stack of reports of his to bring to Giles. Out in the street, Angel offers to escort her back, but Buffy chafes at having a chauffeur; besides, just because they have to work together doesn't mean Buffy has to like it. Angel snaps that she's being a brat — and is suddenly struck with an arrow. We see Faith on top of a building with a henchvamp, who notes her aim is off: she missed the heart.

Buffy carries the wounded Angel to safety. Wesley exposits that Dr. Worth found a huge carcass under a lava bed in Hawaii. He speculated that the carcass was of a dinosaur, but the gang quickly deduces that it was actually an Old One, which means that the Mayor will be vulnerable again after he's Ascended. Angel stands up, but he makes an oogy face and quickly collapses again. They realize that the arrow's poisoned. Giles decides that they need to move Angel to his mansion. Wesley, trying to make himself useful, volunteers to phone the Watcher' Council for a solution.

At the mansion, Wesley announces that the Council will not help them (it's not their policy to save vampires, under any circumstances), even though he tried to convince them. He blathers on about "orders," but at the mention of that word, Buffy gets stone-faced and resigns from the Council. Uhh...can she do that? Dumbfounded, Wesley tries to enlist Giles' help, but when none is forthcoming, he calls Buffy mutinous. On her way out, Buffy tells Wesley to get a job.

Willow has found out that the only cure for Angel's poison is to drain the blood of a Slayer. Sounds like a plan; Buffy says that she'll deliver one. Duly creeped out, Willow hacks into the city's municipal funds to pinpoint where Wilkins stashed Faith. Buffy bursts into the penthouse, brandishing Faith's old knife. Faith, somewhat impressed, taunts that she's not going to be taken alive. And they're off! The fight takes Buffy and Faith past the living room and through the giant half-moon window, landing them both on a balcony. While Faith is dazed, Buffy quickly handcuffs Faith's wrist to her own.

Wilkins chows down on one of the black bugs of the Box of Gavrok while a queasy henchvamp watches. He yaps about the feeling of power coursing through him and his organs shifting in preparation for the remodel. Another minion barges in and tells him that there's trouble at Faith's. Quick! To the Misappropriated-City-Fundsmobile!

Faith manages to break free from the handcuffs. The girls teeter on the edge of the balcony, and Buffy stabs Faith right in the gut. Faith's surprised that Buffy actually did it, but gloats her she still can't help Angel. Faith falls backwards, landing on a moving truck, and is carried away ... leaving Buffy mute with shock and despair.