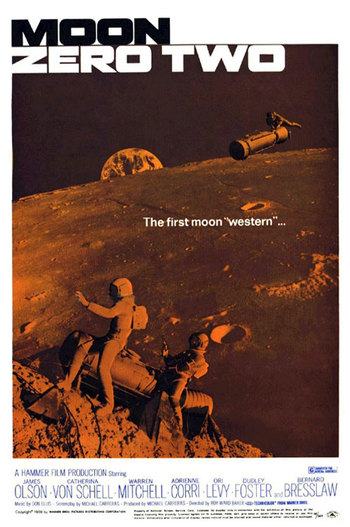 Moon Zero Two is a British science fiction film directed by Roy Ward Baker, produced by Hammer Films and released in 1969 (some three months after the moon landing, in fact). It was billed as a "space Western" and made shortly after the release of Stanley Kubrick's 2001: A Space Odyssey. The film did very poorly at the box-office, but became a minor cult classic in following decades.

In the year 2021 the moon is in the process of being colonized, and this new frontier is attracting a diverse group of people to settlements such as Moon City, Farside 5 and others.

Two such denizens of this rough and tumble lunar society are the notorious millionaire J. J. "100%" Hubbard (Warren Mitchell) and former-astronaut-turned-satellite-salvage-man Bill Kemp (James Olson). The first man to set foot on Mars, Kemp has now left the Space Corporation because it has abandoned exploration entirely in favour of running commercial passenger flights to Mars and Venus. When Hubbard hears of a small 6000-tonne asteroid made of pure sapphire that is orbiting close to the moon, he hires Kemp to capture it using Kemp's old "Moon 02" space ferry and bring it down on the lunar farside; although it would be against the law, nobody except Hubbard (and Kemp) would know that the asteroid was diverted. Kemp has little choice about agreeing, since he has learned that his flight license soon will be revoked due to protests from the Corporation. As extra incentive, Hubbard also claims that he plans to use the sapphire as a rocket engine thermal insulator — meaning he would build more powerful rockets capable of finally colonizing Mercury, and even the moons of Jupiter, for commercial gain.

Meanwhile a young woman named Clementine (Catherine Schell) arrives looking for her brother, a miner working a distant patch of moonscape at Spectacle Crater on the lunar farside. Unfortunately, the trip from Moon City on the nearside would take six days by lunar buggy. Since Kemp could fly there in twenty minutes in Moon 02, she persuades him to help her learn whether her brother is still alive. In doing so, Kemp learns more than he would like about of Hubbard's schemes and methods.

Moon Zero Two contains examples of many tropes, including: