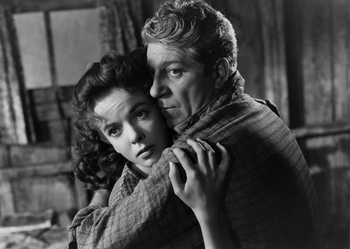 Moontide is a 1942 Film Noir starring Jean Gabin, Ida Lupino, Thomas Mitchell, and Claude Rains. It was directed by Archie Mayo and written by John O'Hara and an uncredited Nunnally Johnson, based on the novel Moon Tide by Willard Robertson.

Bobo (Gabin) is a vagabond on the high seas currently parked in a Californian port. His friend, Tiny (Mitchell), wants him to join a ship headed for San Francisco and beyond. Bobo, however, has other plans and gets incredibly plastered, missing the opportunity.

His drunkenness leads him to believe that he might have killed a man the night before. Tiny is sure of it and assures him that the secret is safe with him. Finding himself on a tackle shack after this night, he’s hired by Takeo (Victor Sen Yung) and his son to sell bait to passing fishing boats. To find his footing for the moment, Bobo decides to stay.

One night, Bobo and his philosophical friend, Nutsy (Rains), happen upon a suicide attempt; a young woman tries to walk into the ocean. Bobo saves her and she’s, at first, ungrateful. But taking her to his tackle shack, she warms up and thanks Bobo. She reveals that her name is Anna (Lupino) and life has been unduly hard for her since she’s had to work as a prostitute.

Finding a kindred spirit, Bobo falls in love with Anna and decides to finally grow some roots. However, this plan is not to Tiny’s liking since Bobo is his cash cow. He soon looks to thwart Bobo’s plans for love and stability.

This film was Jean Gabin’s American debut, but dissatisfied with American cinema after a few films, he returned to France soon after.