This page contains spoilers for Kill la Kill. Read at your own risk. 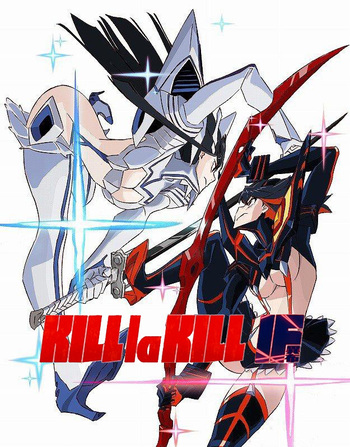 At the end of Honnouji Academy's Naturals Election, the one who appeared before Satsuki is not Nui, but Ragyo!? What is the reason behind Ragyo's sudden appearance? What is going on with all the strange phenomenons that has been occurring?
— The story premise from the official website
Advertisement:

Kill La Kill - IF is a game based off of Kill la Kill, developed by A+ Games and published by Arc System Works in close relation with Studio TRIGGER. The game was released July 26th 2019 on Steam, PlayStation 4, and Nintendo Switch. You can read more information on the official website

The story is a What If? scenario of the anime's story, diverging directly at episode 8, at the conclusion of the Naturals Election story arc.

You initially control Satsuki Kiryuin as the main protagonist of this game, and proceed along with the story while battling against various characters. All scenarios are completely new and fully supervised under the watchful eyes of the original scenario-writer, Kazuki Nakashima. You will be experiencing the story unfolding from the perspective of Satsuki Kiryuin, the rival of the original series' protagonist Ryuko. After completing Satsuki's story, a new What If? story focusing on Ryuko will unlock.

The game is a one on one fighter that takes place on a 3D open area. The game places emphasis on a Tactical Rock–Paper–Scissors mechanic that can give one player a significant advantage in combat if they do well enough.