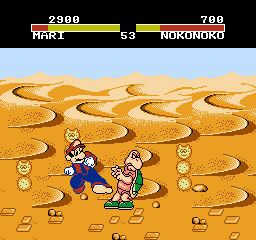 Mari(o) and Koopa *  named Nokonoko, which is the Japanese name , duking it out like never before.
Advertisement:

Kart Fighter is a bootleg (read: unlicensed) two-player Fighting Game made for the Nintendo Entertainment System by Hummer Team. Predating Super Smash Bros. by six years, it's basically Mario characters (those featured in Super Mario Kart, hence the name) beating each other up Street Fighter-style in one of the first NES fighting games. Each character has up to three command moves that allow for more damaging moves.

For a bootleg NES game, it's actually a surprisingly good effort, being one of the best 2D fighting games for the console alongside the officially-made Joy Mech Fight and the NES version of Teenage Mutant Ninja Turtles: Tournament Fighters (and the bigger amount of Street Fighter II feeling you'll ever get on a NES game).