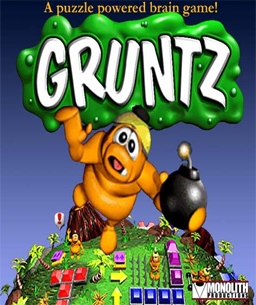 "I don't want to hear ONE WORD about the pink gun!"
— Average grunt equipped with a sponge gun.
Advertisement:

Gruntz is a strategy/puzzle PC Video Game by Monolith Productions, published in 1999.

The gruntz are a bunch of small creatures seemingly made of clay. They strayed from home, thanks to a mysterious portal that brought them to unknown worlds. Now they want to find a way back. Only YOU can help them make it through the hellish puzzles, hordes of enemy gruntz and downright Malevolent Architecture that await them.

The only way to successfully complete a level is to find a Warpstone piece - which is the only thing that can bring gruntz back home - and get someone to carry it to the fortress, where the King is waiting. There are no problems with some of your other gruntz being left behind (or worse), but you DO have to be careful, lest it becomes unwinnable. Thankfully, the levels are littered with random weapons, bizarre tools and fancy toys that will help your gruntz deal with various obstacles.