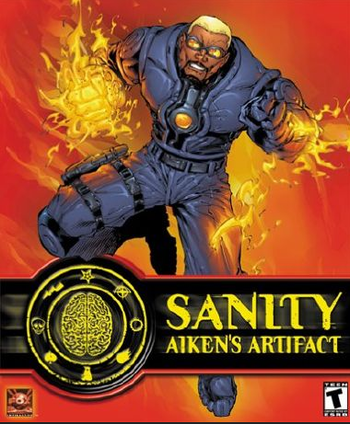 Sanity: Aiken's Artifact is a linear Action-Adventure game for PC, developed by Monolith Productions and released by Fox Interactive in 2000. You play the role of Cain, an agent within the Department of National Psionic Control who was recently taken off duty due to psychic stability problems. He is soon reinstated after the installation of an aggression inhibitor, and is placed on an assignment to apprehend the leader of a psionic radical group set out to attack the Children of Tomorrow project.
Advertisement:

Although the plot initially appears to be a straight action comic book tale, the game gets progressively more surreal and slapstick as the story progresses, until it becomes clear that it has its tongue firmly in cheek.