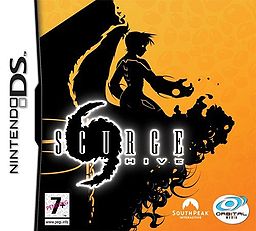 "You can't escape the invasion from within."

Scurge: Hive is a 2006 action-RPG platform game released simultaneously for the Game Boy Advance and Nintendo DS. The premise is quite similar some of to the 2D iterations of the Metroid series, especially Metroid Fusion, but unlike them uses Isometric Projection.

The player takes on the role of Bounty Hunter Jenosa Arma, on assignment from the Confederation. Her mission is to seek out the high security Confederaton Research Lab 56, on planet Inos. 48 hours prior to the start of the game, the base sent out a distress signal. No further contact could be established. Now here's the kicker: the base was designed for the containment and research of a potent infectious life form called the Scurge.

The Confeds are reasonably sure that the Scurge has escaped containment and likely infected or killed everyone on base. Therefore, it is stated in the game's introduction/Jenosa's briefing that her mission is one of data retrieval. They've outfitted her with one of the infection-resistant suits used at the base and special energy-projectile gauntlets, as apparently ordinary firearms could be infected by the Scurge.

Jenosa arrives in orbit around the planet only to be blasted by a ground-to-orbit energy cannon, which somehow transfers the infection onto her ship. After the game's first boss fight, her ship's AI, Magellan, informs her that she herself is infected. A new meter appears on your HUD, indicating the level of infection present in Jenosa's body, thus setting up a time limit for the game. Her infection level increases as you play, and if it reaches 100%, will quickly tick away her health. If Jenosa dies in this manner, she transforms into a Scurge host. However, the infection meter is easily reset by visiting a save point.

Jenosa flees her ship in an Escape Pod to Inos' surface. What follows is a fun little isometric action-adventure as Jenosa attempts to accomplish her mission and save herself from the Scurge infection.