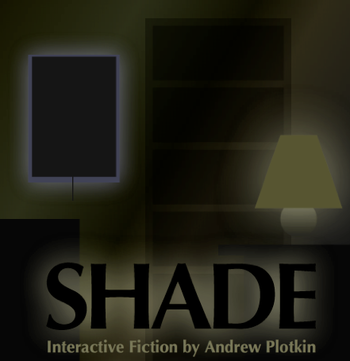 Shade is a one-room Interactive Fiction game made by Andrew Plotkin in 2000. It takes place in the player character's apartment the night before a planned trip to an arts festival. Your ostensible goals are to complete your household chores and make sure that you have everything ready for your trip. Of course, things become more complicated later on...
Advertisement:

To say anything more would spoil this game's unique playing experience; in fact, most of the tropes listed below are major spoilers in name alone, so it's strongly recommended to play through the game at least once before reading them (and the YMMV page).

or play it online here