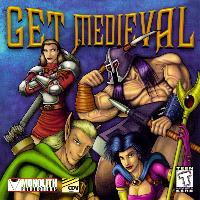 Has someone seen the dragon?
Advertisement:

Once upon a time, the Great Dragon attacked an innocent city Dirindale, killing its king, burning a good couple of houses, causing a great uproar among local heroes and wannabe-heroes, and inspiring Monolith Productions to make a game based on the adventures of the former.

Yes, this 1998 PC game is a Spiritual Successor (not to say: a total clone) of good old Gauntlet but this does not stop it from being an extremely addictive Hack and Slash filled to the brim with an unusual if, perhaps, a bit exaggerated sense of humor, making it an Affectionate Parody of classic fantasy tropes and quirks. For today's gamers, it can have a specifically vintage taste, but when given a chance, turns out to be one of the best possible sources of mindless entertainment when you just need to, you know, kill some Demonic Spiders or other personal space invaders, earn some gold and lose some Hit Points.