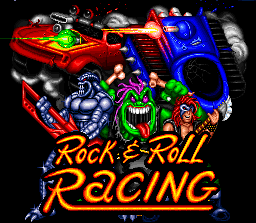 A top-down racing game by Blizzard Entertainment (then known as Silicon & Synapse) released in 1993 on the SNES, and 1994 on the Sega Megadrive/Genesis. Mostly remembered as one of the premier "simple fun" racing games the console had to offer, the controls were easy to pick up, the competition was fierce and the music was epic.

Set in the distant future, the player takes control of one of several colorful competitors on the intergalactic racing circuit, hoping to out-maneuver (and out-shoot) their fellow challengers and the reigning champion of each planet's track. Much of the fun came from relying on using knowledge of the track and "dirty tricks" available from upgrades and power-ups to defeat your opponents (made standard by the Mario Kart franchise).

It was named "Best Driving Game of 1993" by Electronic Gaming Monthly. In 1997 it received an In Name Only sequel Red Asphalt from Interplay, with zero involvement from Blizzard. The sequel changed the perspective to 3D, behind the wheel, with a more intricate storyline and a light upgrade system, and no licensed music whatsoever.