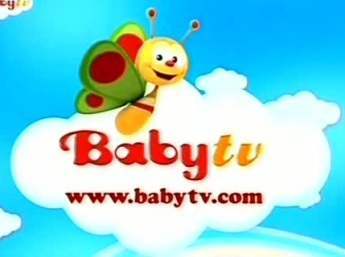 BabyTV is a 24-hour TV network owned by Fox International Channels, which is a division of 21st Century Fox. As its name suggests, the channel broadcasts programming targeted at babies, with shows about learning shapes, colors, words, and basic concepts like big and small.
Advertisement:

If you think this channel seems similar to another TV network called BabyFirst TV, you aren't alone. Though BabyTV launched in 2003, some of its current programming is very similar to programming offered by BabyFirst TV, which started three years later. Despite these similarites, the differences between the two networks are clearly visible in both programming and overall branding.

BabyTV didn't come to the United States until January 2011, when Dish Network added the channel to its lineup. But in doing so, Dish dropped BabyFirst TV, which Dish had carried since 2006. Fans of BabyFirst TV weren't happy, and they campaigned on Facebook for its restoration while denouncing BabyTV. Dish eventually restored BabyFirst TV on a separate channel, but also kept BabyTV on the lineup, giving people a chance to compare the two channels' programming, and ultimately decide which one is better.