¡Soy Moltres el guajolote Macías! Explanation  roughly translates as 'I'm Moltres "the Peacock' Macías!', the line delivered by James when he shows up dressed as a Moltres. English speaking fans know this as "I'm a flaming Moltres!" 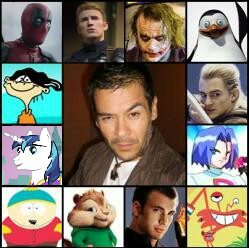 José Antonio Macías Carranco (born September 19, 1967), affecionately known as "Pepe Toño" by fans, is a Mexican voice actor, radio announcer and cast director who has been active ever since 1989. He's known as the more-or-less official VA for actors like Chris Evans, Ryan Reynolds, Matt Damon, Orlando Bloom and Leonardo DiCaprio, and specially as the incredibly bombastic VA for James from Pokémon.

He's known for his comedic roles and ability to imitate multiple Mexican accents.

As the VA for Leonardo DiCaprio

As the VA for Chris Evans

As the VA for Ryan Reynolds

As the VA for Orlando Bloom

As the VA for Heath Ledger