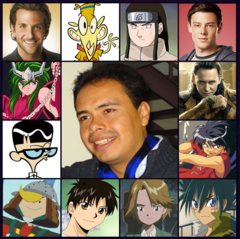 José Gilberto Vilchis (in the middle) and some of his roles
Advertisement:

José Gilberto Vilchis Barrero (born on February 10, 1977), better known as José Gilberto (or Pepe) Vilchis, is a Mexican voice actor who has been known to play the Bishōnen and the Iron Woobie, as well as several villains. He's the nephew of the late VA veteran Jesús "Chucho" Barrero, and they also had rather similar voices.