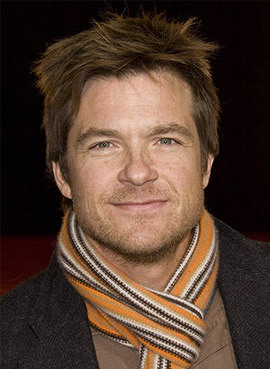 "People have often asked if I'm gay because I don't go out of my way to spit and scratch and give people attitude."
— Jason Bateman
Advertisement:

Jason Kent Bateman (born January 14, 1969) is a prolific American comedy actor. Seriously, you might not remember them all, but you have probably seen at least eight movies with this guy. He began his acting career with a part in Little House on the Prairie. He came to prominence with a supporting role on the 1980s sitcom Silver Spoons, It's Your Move and The Hogan Family and later as the star of Teen Wolf Too (which is something of an Old Shame). He was arguably born to play the Straight Man like no one else since Bud Abbott.

His best-remembered roles are that of David Hogan, the eldest son on The Hogan Family, and as Michael Bluth in Arrested Development. He has been playing largely similar resilient nice-guy roles in a myriad of comedies. In recent years audiences have had something of a "he really can act" reaction as he has managed to find a lot of range despite being largely typecast.

His sister, Justine Bateman, also acts and is best known as Mallory from Family Ties.

TV series on this wiki: