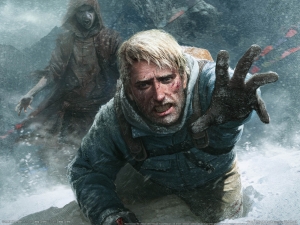 Cursed Mountain is a Survival Horror video game originally for the Nintendo Wii, released in 2009, with a European PC port released in 2010. It is set in the late 1980s atop a mountain called "Chomolonzo" (or "Sacred One") in the Himalayas and is thematically based in Tibetan Buddhism.
Advertisement:

Eric Simmons is a famous mountaineer whose reputation overshadows that of his younger brother, Frank. Envious, Frank Simmons accepts a foolhardy mission to climb Chomolonzo and retrieve a sacred Buddhist artifact, or "terma", that his sponsor claims is hidden near the summit, in order to finally make a name for himself. When Frank vanishes and is presumed dead, Eric refuses to accept it and comes to Chomolonzo to try and find his brother. To his surprise, he finds the local Sherpas have begun abandoning the region in droves, taking with them nothing more than they can carry — which he admits is very unusual for them.

He soon discovers that Frank has angered the goddess of Chomolonzo through his deeds, and by opening the terma, has torn a rift between the mortal world and the Bardo, the realm in which the souls of the dead wander until it is time for them to either reincarnate or achieve Nirvana, allowing swarms of angry ghosts and demons to pour into the realm of the living. Eric refuses to get caught up in this mystical stuff, instead insisting that all he wants to do is to reach the summit and find his brother.