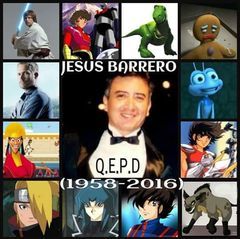 José de Jesús Barrero Andrade (July 26, 1958 - February 17, 2016), better known as Jesús "Chucho" Barrero, was a famous Mexican voice actor who is most famous as his role as Seiya from Saint Seiya. He began as a child actor in The '70s and started to get into anime dubs in The '80s, with his Star-Making Role being none other than Koji from Mazinger Z, and later as Rick Hunter and Scott Bernard from Robotech. As a result, he was one of the most popular voices of Hot-Blooded Heroes during the The '80s and early 90s, though he went on to many other different roles in later years. Several of his relatives are or were actors, including: his ex-wife (Patricia Palestino), his daughter (Yectli Barrero Palestino), his nephews (José Gilberto Vilchis and Víctor Covarrubias), his sisters Banny and Elsy, etc.

Sadly, on February 17, 2016, he passed away after several months of battling against cancer.

Soy un Jedi, tal como mi padre antes de mi. Explanation "I am a Jedi, like my father before me."