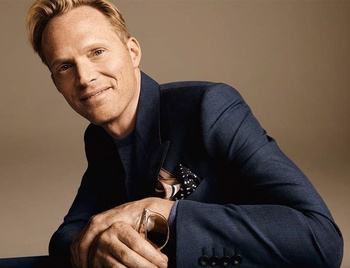 What is acting, if not imagination persevering?
"The trouble with talking about acting is that it's like sex. It's enormously fun to do but just dreadfully embarrassing when you have to talk about it."
Advertisement:

Paul Bettany (born 27 May 1971 in Harlesden, London) is an English-American actor.

He had his breakout role as a naked Geoffrey Chaucer in A Knight's Tale, which is probably saying something, and has since starred in a wide variety of movies where he usually steals all the scenes he's in.

He's married to actress Jennifer Connelly. Their son Stellan is named after fellow Marvel Cinematic Universe actor Stellan Skarsgård, and they also have a daughter, Agnes.

As the Battle of Waterloo rages, the Prince of Orange is called out on his many failures.

As the Battle of Waterloo rages, the Prince of Orange is called out on his many failures.