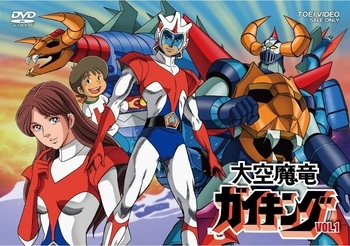 Daikū Maryū Gaiking (Great Sky Demon Dragon Gaikingnote official international name: "Dino Mech Gaiking") was a Super Robot mecha anime series produced by Toei Animation, credited as an original idea by Akio Sugino. However, in reality the original idea was Go Nagai's. Toei deliberately took Nagai out of the credits in order to avoid paying him royalties. Because of that, Nagai sued Toei and refused to collaborate with them for many years. The legal battle lasted over a decade. Nagai himself confirmed that he was the creator of Gaiking at the 2007 Naples Comicon.

It ran from April 1976 through January 1977 and consisted of 44 26-minute episodes. Gaiking was notable for being one of the few super robot series to take place in real places outside of Japan, and for being the first Super Robot series to have a mobile carrier for the chief robots. In the USA, Gaiking was part of Mattel's popular Shogun Warriors import toy line of the late 1970's and Jim Terry's Force Five anthology series. In 2005, an In Name Only reimagining titled Gaiking: Legend of Daiku Maryu was produced.

The original story chronicled the battle between the crew of the semi-transformable carrier Daikū Maryū (called both the Great Space Dragon and Kargosaur in the US version) and the Super Robot Gaiking invented by Dr. Daimonji (Prof. Hightech in the English language version of the show) against an invading race of aliens called the Dark Horror Army in the dub from the planet Zela which is facing destruction by a black hole as their population starts to mutate (the fact that their bearded ruler now wears his face on upside-down is considered only a minor mutation). Notable aspects of the series include the dinosaur-based designs of the Daikū Maryū and its support machines and the use of part of the carrier to form the main robot.

Gaiking was piloted by former up and coming baseball star named Sanshiro Tsuwabuki (Aries Astronopolis in the dub), who was drafted for the job because his latent psychic powers made him the only one capable of doing so. All other similarly empowered candidates were assassinated by alien agents, with Sanshiro himself injured in an attack that ended his sports career. Gaiking is most easily distinguished from other mecha by its skull-shaped golden torso formed from the head of the Daikū Maryū and its golden horns.

The leader of the alien villains was named Prince Darius, and all of their ships and mecha were fish-shaped, which most likely inspired the Darius series of video games. It was also dubbed in Latin-American Spanish as El Gladiador, which aired as part of a showcase called El Festival de los Robots. In this version, Sanshiro Tsuwabaki was called Brando Drummond with the Daiku-Maryu itself called "El Gran Dragon del Espacio".

In 2009, William Winckler, the man behind the infamously cheesy english dub for Tekkaman, produced equally cheesy english Compilation Movies for Gaiking, along with several other of Toei's older titles. Shout! Factory released all three movies on DVD

on May 21, 2013. The original, unedited TV version of the anime has also been licensed by Discotek Media for a DVD release.

And in a rather surprising twist over other Super Robots, Gaiking is getting a CG movie remake. Watch the trailer here.