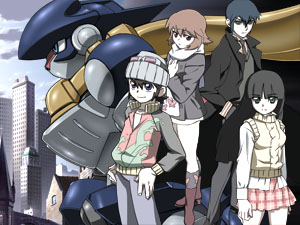 Gad Guard is a TV Anime from studio GONZO directed by Hiroshi Nishikiori. With an original run between April and September 2003, the series culminates in 26 episodes. A Light Novel was adapted from the anime with illustrations by Izuna Yoshitsune and published by Media Factory in 4 volumes.

The story takes place several hundred years in the future, the resources of the Earth having run out, the progression of the human race stagnated and the world divided into "Units". Hajiki Sanada lives with his mother and sister in Unit Blue, in a place called "Night Town", where all electricity is shut down at midnight. Haijiki often skips school to work as a courier earning money for his struggling family. One day he has a chance encounter with a GAD, a device with the ability to reconstruct materials while reacting to feelings of an organic lifeform, which transforms into a giant robot. Together Hajiki and his new Techode set off on a journey of personal discovery to locate the other GADs and their owners, who may be friend or foe alike.