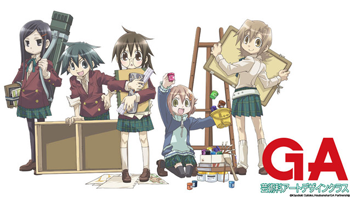 "After all, G.A. does have a high percentage of crazy students."
— Uozomi, on the GA students
Advertisement:

Ayanoi High School's G.A. is a class that specializes in the arts. It's at G.A. that a particular five are focused on. Kisaragi Yamaguchi, Miyabi "Professor" Oomichi, Namiko Nozaki, Tomokane and Miki "Nodamiki" Noda. The manga uses its arts class setting well, using this as a chance to teach the audience a few things about color, composition and other things that are usually done at these sort of schools. The yonkoma manga was written by Satoko Kiyuduki, previously known for the artwork of Sting Entertainment's Dept. Heaven games.

Compare with Hidamari Sketch, another series focusing on students in high school art programmes serialized in Manga Time Kirara Carat. While you're in the neighborhood, Sketchbook may also be used to compare and contrast. The series has also been referred to as "Azumanga Daioh, but in art class".

An anime adaptation produced by AIC aired in the summer of 2009. In North America, the manga is licensed by Yen Press. The seventh and final volume of the manga was released in February 2016 in Japan and October 2016 in North America.