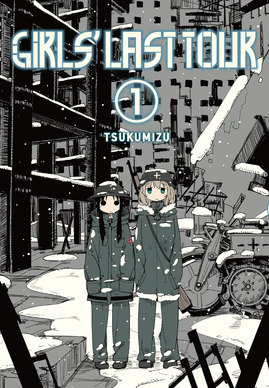 In an industrial world struck by a vague apocalyptic event, two people yet survive.

Chito and Yuuri are two young girls still alive in the mostly empty world. Chito a dutiful and serious bookworm, while Yuuri cares little about anything but when their next mealtime is.

As the two trudge on through the populace devoid landscape, they keep each other company, enjoy what little creature comforts they come across, and shoot the occasional philosophical question at each other.

The two have no huge reason or motivation to keep on. They survive for survival's sake, going on a last tour of a world long gone.

The series was adapted into an anime by White Fox for the Fall 2017 season. Yen Press released the manga in English while Sentai Filmworks has licensed the anime for an English release.