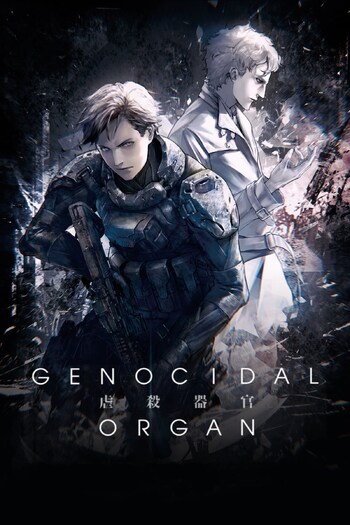 "I want to share my heart with people, but not with phantoms that play with the words and read the letters with slavering tongues."
"Captain Clavis Shepard, you are hereby sworn thus the testimony you are about to give before this committee, regarding Special Operations I Detachment and its missions, shall be the truth, the entire truth, and nothing but the truth, omitting nothing. Please begin by answering the question foremost on everyone's minds: who is John Paul?"
Advertisement:

Genocidal Organ (虐殺器官, Gyakusatsu Kikan) is the first novel written by Japanese author Project ITOH. As part of the series of films adapting his stories, including Harmony and The Empire of Corpses, it received an animated adaptation that came out in 2017, produced first by Manglobe, and then finished by Geno Studio.

In 2015, Sarajevo is obliterated by a nuclear bomb used by terrorists. As a result, democracies of the world clamp down hard on their populace, becoming surveillance states that have nearly eliminated all terrorism within their borders, at the cost of tracking their citizens with every step they take. However, developing nations around the world are suddenly becoming engulfed in mass murder. Within a matter of months, peaceful communities become embroiled in genocide and civil war. In response, US Special Forces Officer Clavis Shepherd is sent to track down and apprehend John Paul, the man suspected to be responsible for the atrocities.

But as Clavis's hunt for John Paul continues, he discovers a horrifying truth behind the source of the genocides, one that will destroy his faith in the system of the world.

"My wife doesn't need to know what a shithole this world is. I don't want my kid growing up thinking our world is teetering on the brink of hell! She's going to feel safe and happy, you got that, Clavis? I'm prepared to protect my world. A world where I can order a jalapeno pizza and pay for it with my ID thumbprint! Where I can throw away half my Big Mac just because I'm full and I want to!"