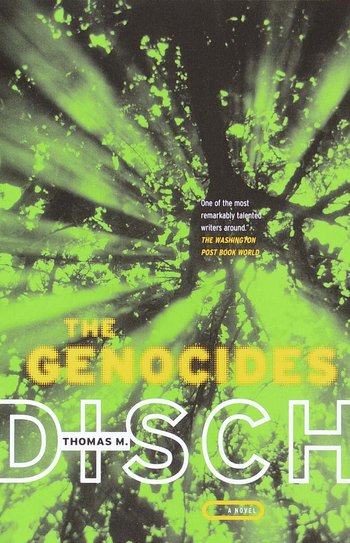 Here and there, scuttling about the rubble, the incendiary mechanisms could be glimpsed attending their business.
At this remove they seemed quite innocuous. They reminded Jackie of nothing so much as of Volkswagens of the early Fifties, when all Volkswagens seemed to be grey. They were diligent, tidy, and quick.
"We should be getting on our way," he said. "They'll be mopping up the suburbs soon."
"Well, good-bye, Western Civilization," Jackie said, waving at the bright inferno, unafraid. For how can one be afraid of Volkswagens?
— The Genocides, chapter 4

The Genocides is the debut novel of the late sci-fi writer Thomas M. Disch. Published in 1965, it introduced many readers to his trademark nihilism and misanthropic characterization. The novel is also considered a cult classic of the New Wave Science Fiction movement of the 1960s.

The Year is 1979. It's been nearly a decade since a mysterious race of aliens used giant 'Plants' and floating metallic spheres that breathe fire to wipe out most of humanity. One of the last remaining communities on Earth is the small farming town of Tassel, which is surrounded by the ever-encroaching Plants. The 200 or so survivors meek out a miserable existence by siphoning sap from the Plants to irrigate their corn crops. Any marauders that attack the town are killed and chopped up into meat, which helps the townspeople reserve their cattle supply. They are led by the conservative farmer Anderson and his sons, the brawny but stupid Neil, and the liberal yet loyal Buddy. A fundamentally religious man, Anderson uses the Old Testament to rule with an iron fist, successfully keeping the town intact up until this point.

One day in late summer, Anderson and his men kill a group of other survivors. They spare two people they deem useful: Alice Nemerov, a doctor, and Jeremiah Orville, a former miner turned survivalist. Orville experiences a personal loss during the massacre and vows revenge against the Andersons. Meanwhile, a trio of the metal orbs close in on the town. And from there, things go to hell...