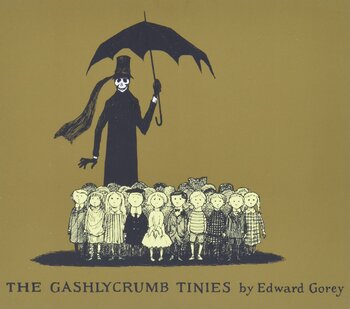 Gorey, Gorey, what a hell of a way to die.
The Gashlycrumb Tinies is a short, macabre book by Edward Gorey recounting the deaths of 26 small children. These are told in 13 couplets in rhyme. The book was published in 1963 in a collection of three "Cautionary Tales" called The Vinegar Works.
Advertisement:

All throughout the book, the children meet all kinds of strange and unusual fates, all happening with little to no context. These range from things like falling down a flight of stairs, choking on peaches, being done in by thugs, drowning in lakes, run through with awls, or even dying of boredom.

To this day, despite (or probably because of) its subject matter, The Gashlycrumb Tinies is considered the most popular, as well as the most successful of all of Edward Gorey's works. Even after 50 years since being published, the books has never ceased to go out of print.