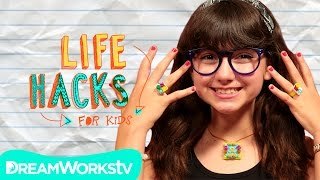 Life Hacks for Kids is a series of Web Videos hosted by YouTube channel DreamworksTV. In this show, a girl (usually referred to as Sunny) showcases 3 life hacks revolving around the theme of an episode. For example, "Pizza Box Hacks" involves three crafts involving, well, pizza boxes.
Advertisement:

The show has quite a bit of a following and generally gets good feedback. Some have even lampshaded how it's one of few YouTube videos (let alone a series) where people comment "wow this is awesome".