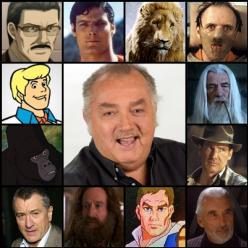 José Lavat (in the middle) and some of his roles.
Advertisement:

José Francisco Lavat Pacheco (23 September 1948 – 15 May 2018) was a Mexican voice actor. He was best known for being the recurring voice actor of Robert De Niro, Harrison Ford, Michael Caine, Ian McKellen and Al Pacino in the Latin American Spanish dubs of their films. In anime he was known as the narrator in the Latin American Spanish dubs of all installments of the Dragon Ball franchise (with the exception of the first 60 episodes of the original Dragon Ball, which were narrated by Carlos Becerril, and all but the first nine episodes of Dragon Ball GT, with the rest of the series being narrated by Joaquín Martal). He also voiced Christopher Lee's Count Dooku in the Star Wars Prequel Trilogy, the Clone Wars miniseries and the 2012 TV Show.

He was once married to fellow voice actress Cristina Camargo and at the time of his death, he was married to Gisela Casillas. His older sister (Queta Lavat), late brother (Jorge Lavat), nephew (Julián Lavat) and sister-in-law (Rebeca Manríquez) are or were also actors.