Film / The Chronicles of Narnia 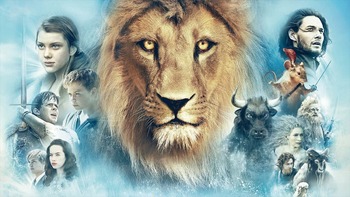 This is an awfully big wardrobe.

The Chronicles of Narnia film series adapts the plot of the books by C. S. Lewis into theatrical films. Three of them have been released:

Production was handled by Walden Media. Financing and distribution for the films were originally done by Disney, but after the second film the rights were given to 20th Century Fox, who was expected to produce the remaining films. In 2017, Joe Johnston has been announced to work on an adaptation of The Silver Chair that might induce a Continuity Reboot. However, in 2018, it was announced

that Netflix had been signed to develop series and films based on the franchise.