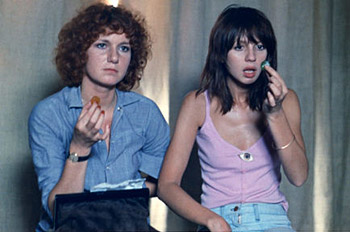 Céline et Julie vont en bateau (Céline and Julie Go Boating) or Phantom Ladies over Paris is a 1974 French arthouse Magic Realism film directed by Jacques Rivette with an understated matter-of-fact tone, crafted out of sheer WTF. The film's French title contains a pun; "vont en bateau" can also mean "get caught up in a story" or "go crazy".

The film opens with soft-spoken red-headed Julie (Dominique Labourier), a librarian lounging in a Parisan park whilst reading a book on magic (the occult kind). Stage Magician Céline (Juliet Berto) dashes past and drops an article of clothing; much like the White Rabbit from Alice in Wonderland. Julie, sure enough, picks it up and pursues her. And it goes on from there.

The film is, at heart, a reflection on the nature of the narratives of books and movies; with particular emphasis on the Breaking of the Fourth Wall and insertion of the viewer into the story. Furthermore, it is about adults undergoing age regression and escaping back to the playfulness, innocence and irrationality of childhood.

The film is more than three hours long, unconventional, and extremely hard to find, but also funny, entertaining, creative, light-hearted and charming.