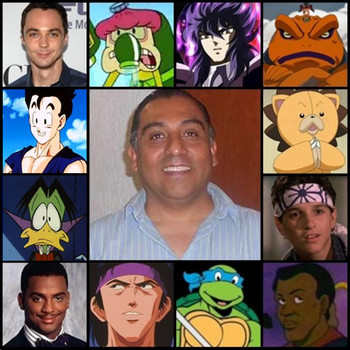 The late Luis Alfonso Mendoza (center) and some of his roles
Advertisement:

Luis Alfonso Mendoza Soberano (November 20, 1964 – February 29, 2020) was a Mexican voice actor, director and announcer with over 38 years of experience in the media. His best known roles include adult Son Gohan in the Dragon Ball franchise, Sheldon Cooper in The Big Bang Theory, Carlton Banks in The Fresh Prince of Bel-Air, Count Duckula, and he was also a recurring voice for Bugs Bunny and Daffy Duck in several Looney Tunes works, showing himself as one of the most versatile voice actors in the business.

He was the younger brother of Ricardo Mendoza and father of Nayeli Mendoza, and was married to Lourdes Adame, all of them notable voice actors. With the support of his wife he founded ArtSpot, a voice acting academy, to teach and introduce new voice actors into the media, where he worked as a teacher on pair with his voice acting work.

Mendoza was tragically murdered on February 29, 2020, along with his wife and brother-in-law, apparently due to issues over a building. He was 55 years old.