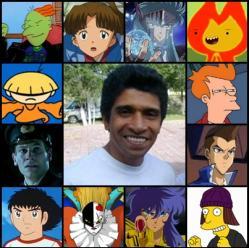 Benjamín Rivera and some of his roles

Benjamín Rivera Jaramillo (born May 9, 1969), better known as Benjamín Rivera, is a Mexican actor, voice actor and dub director. His extremely energetic and high pitched voice makes him an excellent Tenor Boy, and is among the few Spanish VA's able to regularly tackle boy roles that would normally be given to voice actresses. Other than that, his characters tend to be either very snarky or very adorkable - if not both.

His wife, Belinda Martínez, is a voice actress herself.